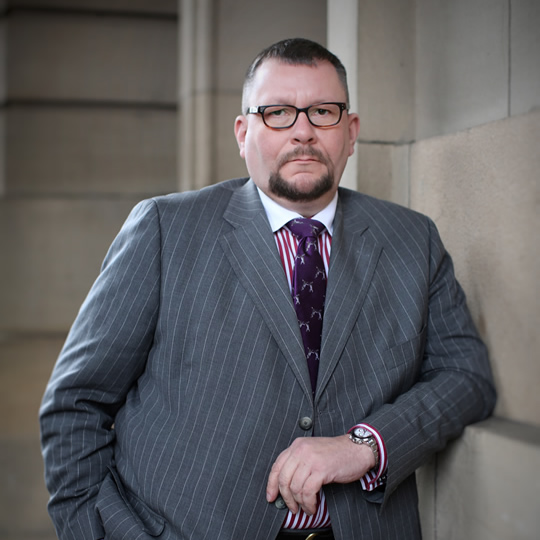 Until his appointment as Chairman of Faculty Services Ltd., Tony Graham Q.C. was our Stable Director for over a decade, and represented the Stable and its members on the Board of Faculty’s service company. He has also previously served a number of terms on the committee of The Scottish Criminal Bar Association.

Tony Graham Q.C. practices almost exclusively in the High Court of Justiciary, defending those indicted there. Since calling in 2002 he has consistently enjoyed one of the busiest High Court practices of the Criminal Bar.

He was appointed to the rank and dignity of Queen’s Counsel in 2017 having been regarded as “Senior Junior” Counsel for a number of years. In the years prior to taking silk and since, he has been routinely instructed to lead Junior Counsel in cases of such significance as to merit the employment of both Senior and Junior Counsel. He has been lead Counsel in all manner of trials where the charge is of the utmost seriousness, including around 75 murder trials, trials with allegations of Serious and Organised Crime and, in general terms, trials involving violence, armed robbery, sexual offences, drugs offences and firearms offences that are considered at the most serious and complicated end of their own category. Additionally, he has been lead Counsel in appeal cases, including a full bench appeal where the law of evidence relating to video recordings was reformed, and also in successfully opposing an application by the Crown made under Double Jeopardy legislation. He has appeared before Court-Martials, The Judicial Committee of the Privy Council, The Judicial Committee of The General Assembly of The Church of Scotland and has been involved in extradition cases, one proceeding to the House of Lords.

In relation to those prosecuted in the lower courts, Tony is regularly instructed in relation to regulatory criminal offences, road traffic prosecutions and has acted regularly for those employed in public service industries, the armed forces and professions.

As an Advocate Depute ad hoc (part time High Court prosecutor) he has prosecuted crimes involving significant violence, sexual offences, robbery, firearms offences, and drugs. He has also been specifically trained by Crown Office in relation to the prosecution of sexual offences.

In respect of his media law practice, he has been instructed over many years by publishers of national newspapers and press agencies, providing both pre-publication advice and in dealing with post publication issues of defamation and contempt of court.

Apart from ongoing professional development relating to Criminal Law, Tony has an interest in medicine, engineering and science, and ensures his knowledge of forensic medicine and science, psychiatry, physics and engineering are such as to be able to effectively examine and cross examine any expert witness who may be called to give evidence.

His understanding of matters scientific and medical, and of engineering coupled with his experience in defending those charged with murder, other criminal homicides and crimes with medical consequences, has placed Tony in an ideal position to provide effective representation to interested parties in Fatal Accident Inquiries, and to represent individuals or bodies charged with health and safety contraventions. As such, Tony is often instructed where complicated mechanical or medical evidence is a factor. These have included inquiries involving maritime, aviation and road traffic fatalities.

Criminal Defence agent for 7 years prior to Calling;